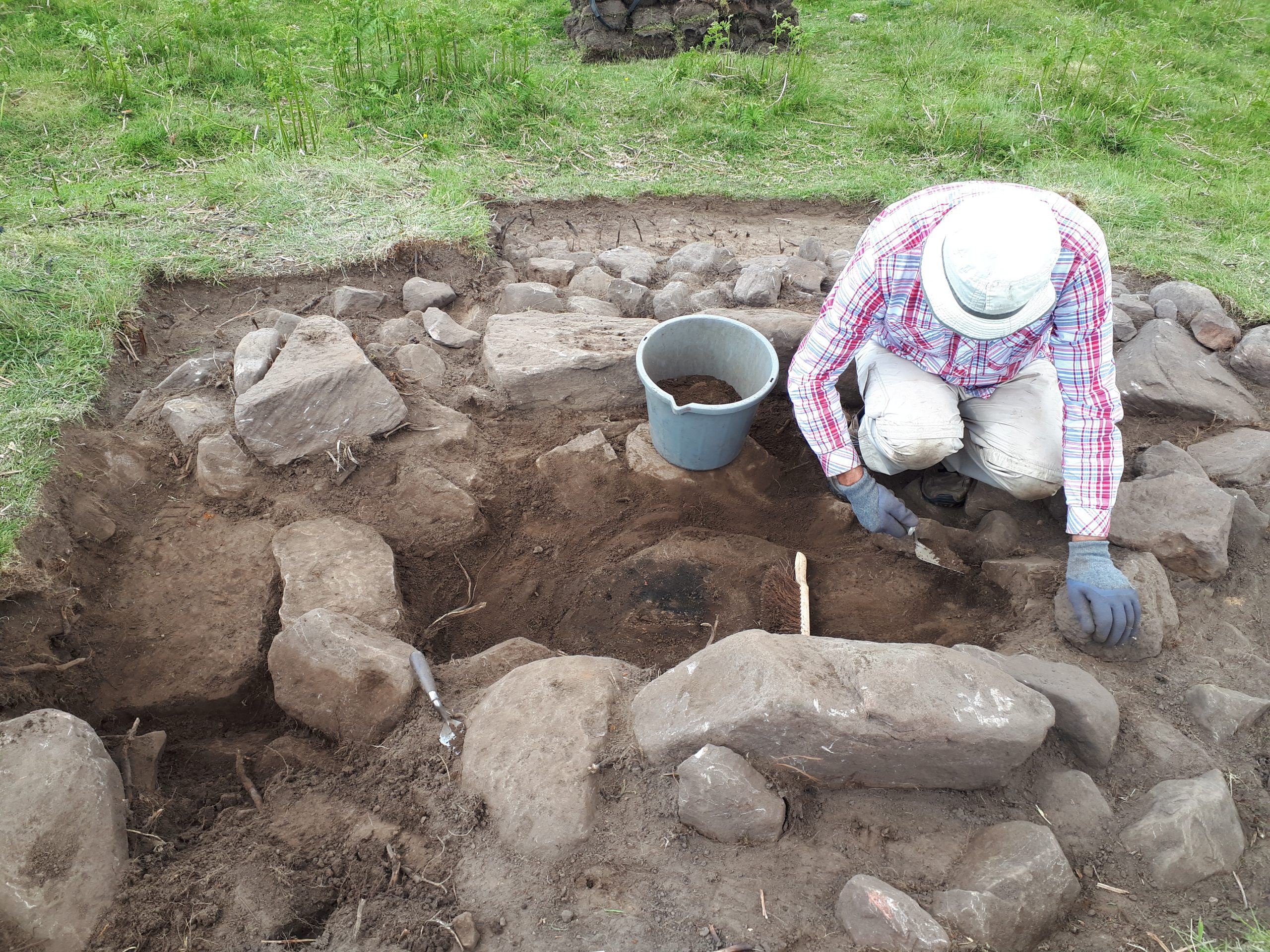 This was a partnership project between Revitalising Redesdale, the Ministry of Defense (MOD)/Defense Infrastructure Organisation (DIO) and Breaking Ground Heritage and engaged volunteers from the local community and Wounded, Injured and Sick (WIS) veterans and serving personnel from the military community.

A report of the results has now been produced and can be viewed/downloaded here.

The main findings detailed in the report are:

Plans are being developed for a return visit to Yatefield in 2022, to try and uncover more of this fascinating site! Further information will be available here and on our social media pages. 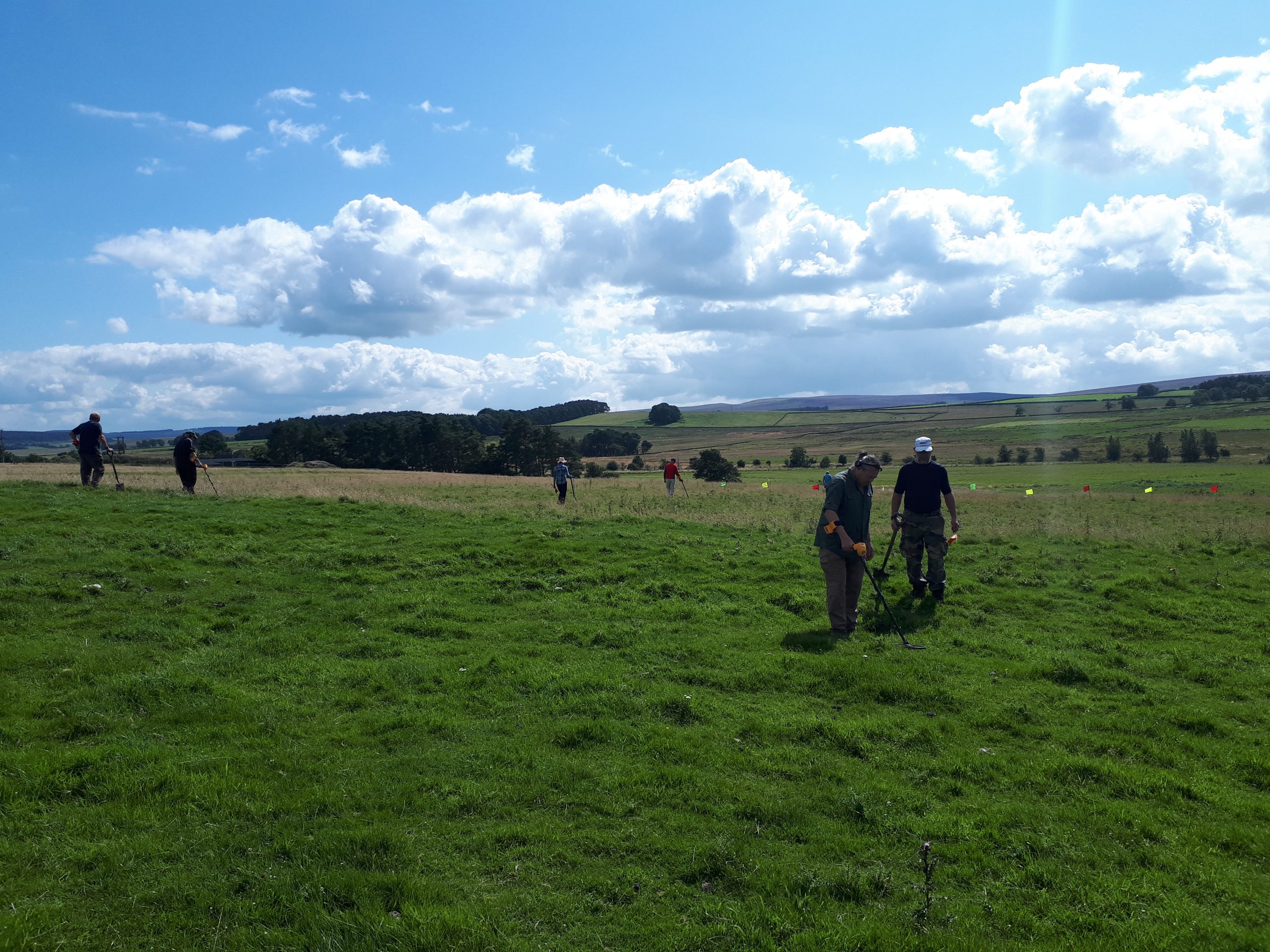 Our fieldwork investigation into the Battle of Otterburn, looking for physical evidence of the battle that took place in 1388, was carried out in August 2021 and involved a mixture of geophysical survey, test pitting and metal detecting survey. A report on the findings of the fieldwork has now been produced and is available to download below.

If you would like to find out more about the Battle of Otterburn project, we are holding a free online Zoom talk about the project on Thursday 17th February, 8-8.45pm. The talk will be given by the Battlefields Trust and will discuss the findings of the last 3 and a half years of research into the battle as part of the Revitalising Redesdale scheme. You can register for your free place at https://www.revitalisingredesdale.org.uk/events/battle-of-otterburn-conflict-in-a-landscape-online-talk/

Revitalising Redesdale Landscape Partnership is proud to announce the launch of its online radio play, ‘Amid the Hills of Redesdale.’ Written and directed by Rachel Cochrane, its performance has involved bringing local people of all ages together to tell the fascinating story of Redesdale’s history.

The radio play was funded by The National Lottery Heritage Fund as part of the £2.8m Revitalising Redesdale Landscape Partnership scheme.

The play tells the story of the beautiful and remote Northumberland valley of Redesdale from Roman times to present day, with its focus on the forgotten army of workers and their families who came from near and far to build the Catcleugh Reservoir. This community lived on the two banks of the River Rede (nicknamed Newcastle on the north bank and Gateshead on the south) in huts named ‘Black Houses’, so called because they were coated in tar to keep out the rain. Constructed between 1890 and 1905, the reservoir was commissioned to provide water to the booming population of industrial Tyneside.

Inspired by the artefacts and photographs left behind by those who were part of the Catcleugh story, the drama unfolds through a series of monologues, with characters telling their imagined stories of joy and tragedy against a backdrop of brutal hard work and danger. The play drew on extensive research carried out by Northumberland National Park volunteer, Tony Evans, author of ‘They Danced, They Drank and They Built a Reservoir.’ For several years, Tony led ‘Black House’ tours; the last remaining workers’ hut at Catcleugh. The play is also dedicated to the memory of Beryl Charlton, local author, historian and archaeologist, who played the part of Dorothy Temple in the play, and who sadly passed away in July 2021, shortly after recording. 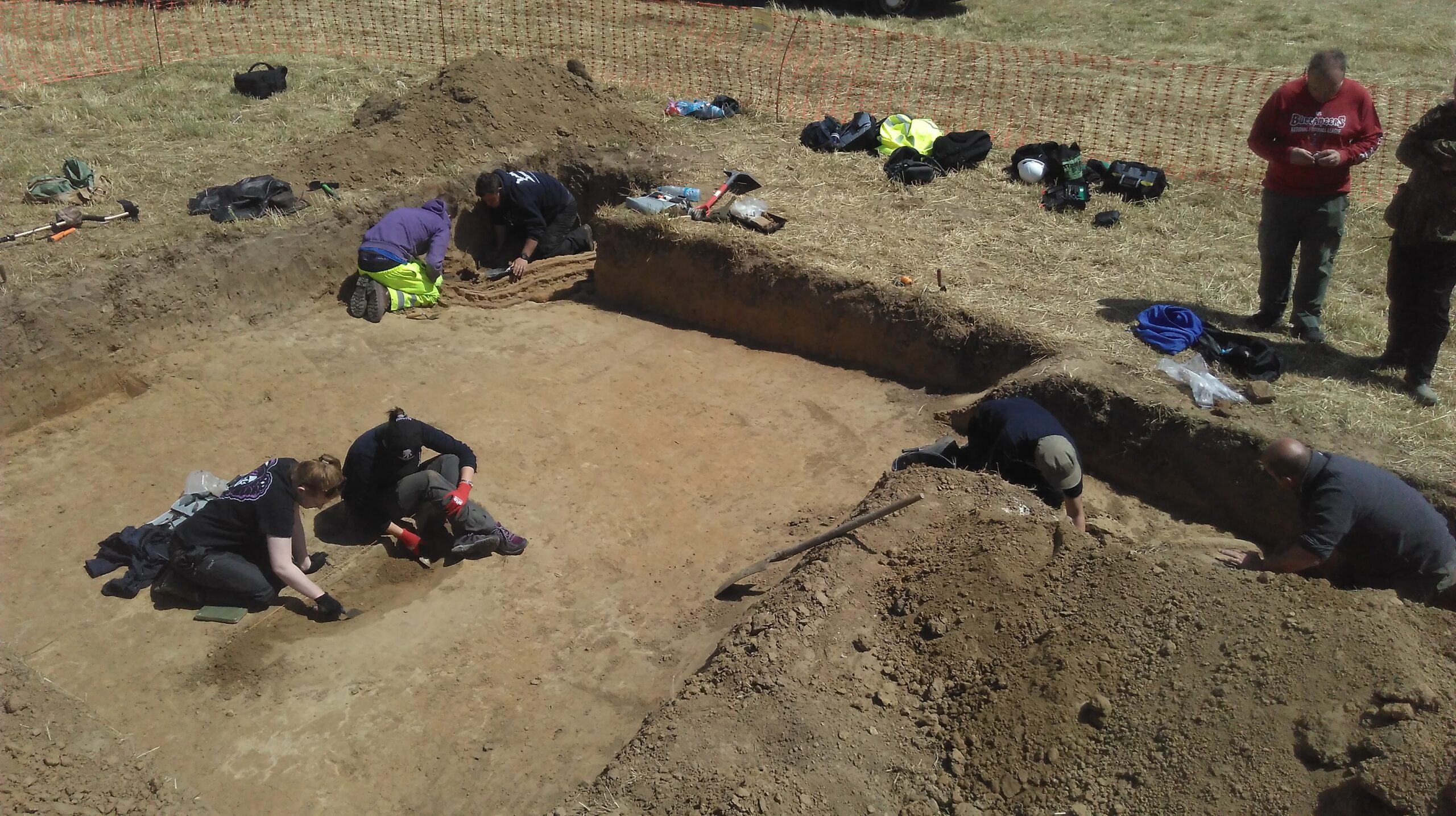 This talk, given by Alex Sotheran, Archaeology Advisor for the Ministry of Defence, focuses on recent (2017, 2018 & 2019) excavations at Bullecourt, in France where Mark II tanks attacked German positions whilst supporting Australian soldiers in 1917. The site was excavated and revealed some surprising and clear evidence for the tank attack which over turned the previous commentary about the battle. The project was also staffed by volunteers made up of ex-forces veterans suffering from various physical injuries and PTSD and helped their recovery through the Operation Nightingale programme of archaeological works.

You can view a recording of the talk on the link below. Please note, viewing is restricted to over 18s as it contains images of human remains and some (mild) swearing. 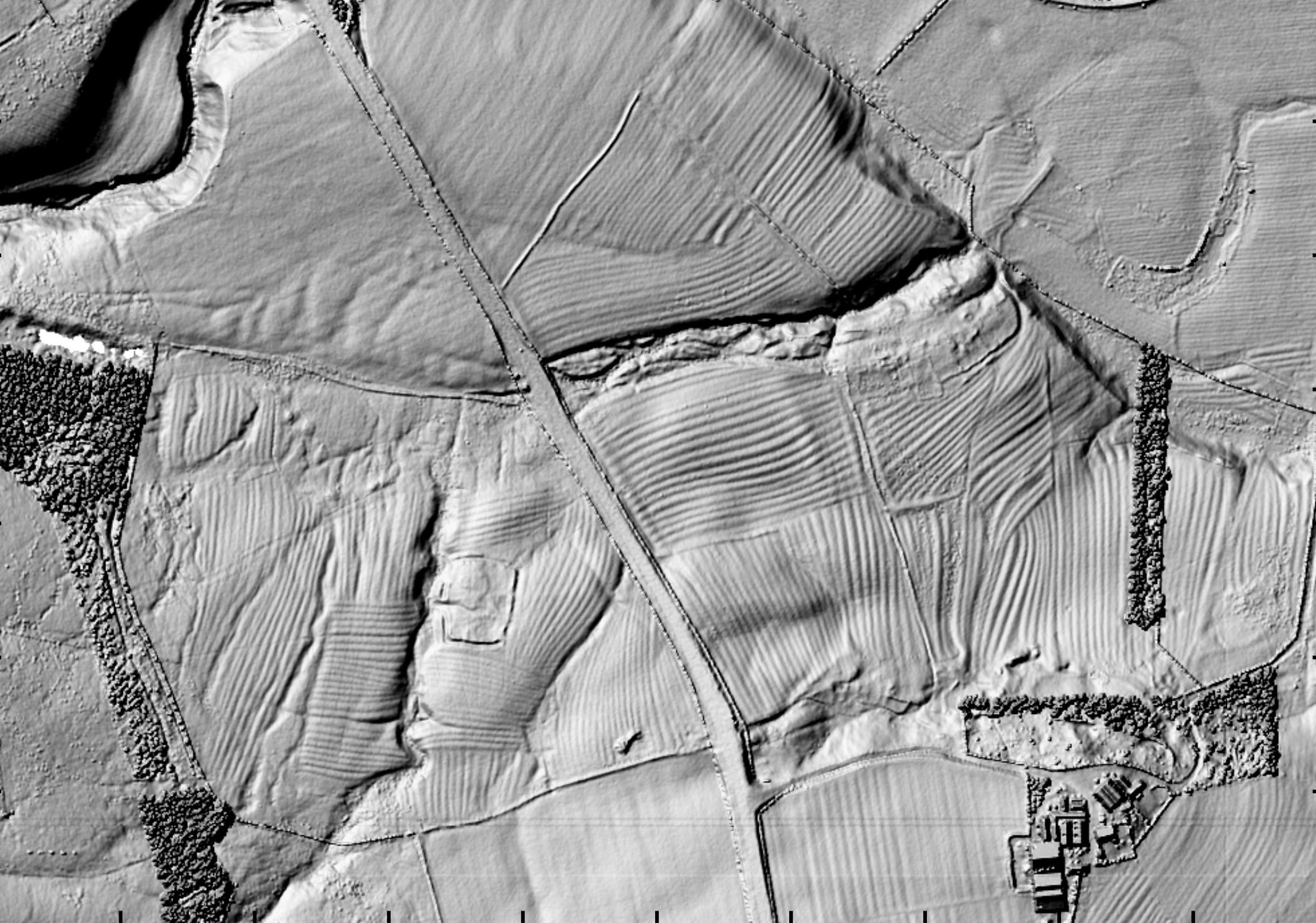 As part of the project, volunteers surveyed a whopping 333 square kilometres of Lidar data for Redesdale, recording a diverse range of sites, the majority of which were previously unrecorded. Following validation by the Project Consultant (Paul Frodsham of ORACLE Heritage Services), 1348 new records have been created as part of the project and will now be made publicly available through the Northumberland Historic Environment Record (HER) – visit the Keys to the Past website to take a look.

The Lidar survey has revealed a wealth of new detail for many known or suspected archaeological sites, as well as many entirely new sites, with 80% of all sites being previously unrecorded. Discoveries made by this project include:

You can read all about the project in our report below, which explains what we did and how as well as detailing some of the exciting things we found. 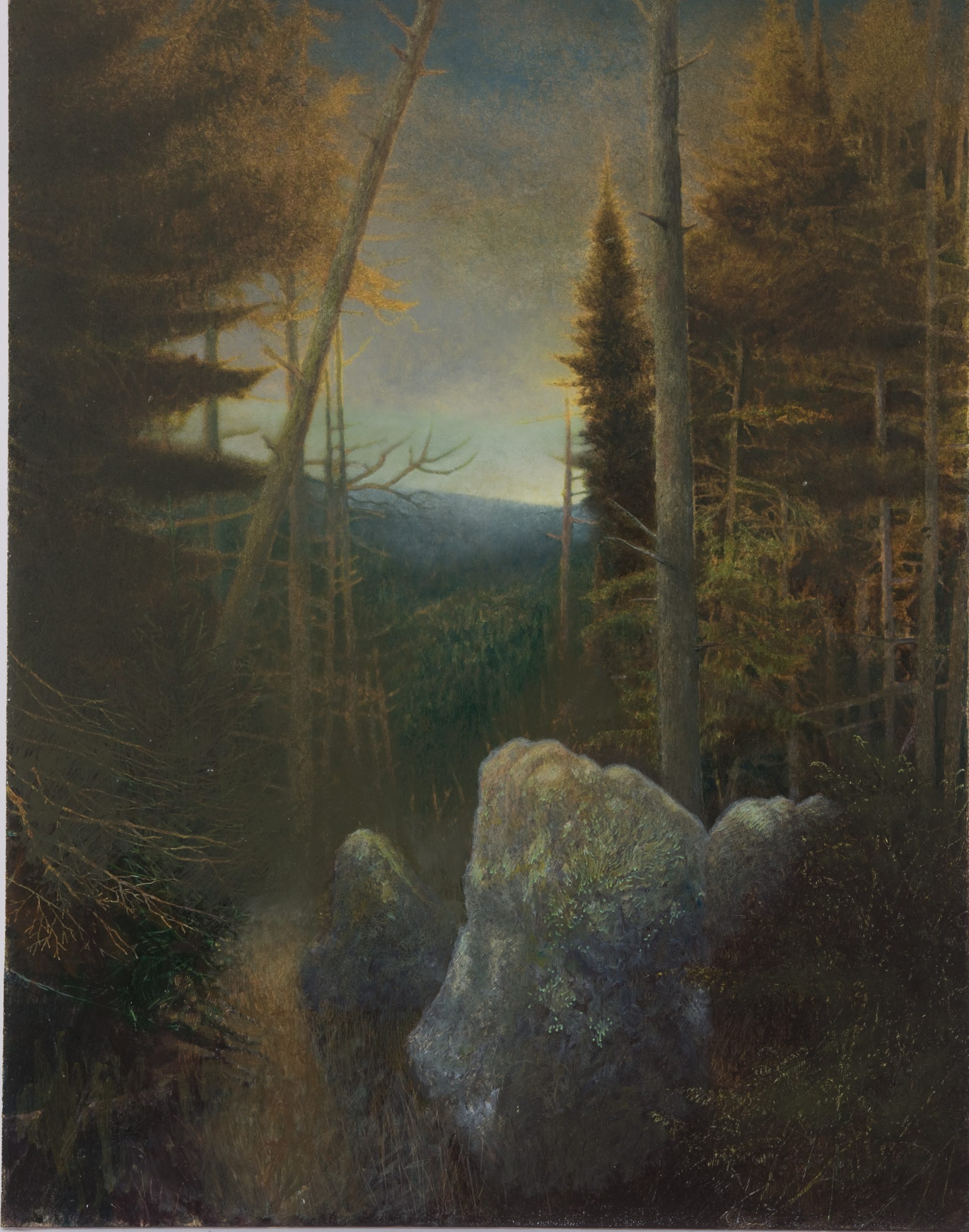 This week for My Revitalising Redesdale, we are taking a break from our team’s stories to bring you quite a different view of Redesdale and its neighbouring valleys through the beautiful and characterful art of Sam Douglas. Many Redesdale residents will recognise the location of our featured painting: The Three Kings, near Byrness.

Sam Douglas has spent ten months living and working at Highgreen, Tarset. He has been exploring the area and the wider Northumberland and Borders remote locations; much of this on foot or by bike. Sam has been fascinated by the ancient and more recent man-made structures that scatter the remote parts of the area and county – erected stones, cup and ring marks and remnants of industrial workings.

The Three Kings is a rare example of a Bronze Age ‘four poster’ stone circle. Although common in Perthshire and elsewhere in Scotland, only 22 have been recorded in England (Historic England), two of them in Redesdale and North Tynedale, hinting at a possible strong connection with communities north of the border. We contacted Sam to find out what his thoughts were about his charismatic corner of Redesdale:

“I visited the three kings fairly soon after arriving at VARC [Visual Arts in Rural Communities]; I always like to get hold of a detailed map when I go somewhere new and try and find any ancient sites marked upon it – especially standing stones [and] stone circles.

There is a forestry track close by to VARC which also doubles as part of the Pennine way that I cycled along to reach the Three Kings. It runs parallel to the busy A68 and offers nice views to the Cheviots. This became a fairly regular route for my evening cycles to get out into the landscape after a day painting in the studio.

I found the artificial landscape of Kielder with its cycles of timber harvesting to provide an interesting contrast with the permanence of the Three Kings set within it – the stones themselves have some amazing Lichens growing on them, and now that the forest has been cleared around them, there are wide views across the valley and up onto the Cheviots.

I sat and drew the stones a fair few times as well as photographing them for reference material, there were often plenty of swallows flying around and also a good few midges – it was a good way to spend an hour or two.
I have since painted four different versions of the stones- in various conditions, before and after the site was cleared of trees. These are a part of a group of paintings which attempt to map out my explorations in northern Northumberland – with the Cheviots being a particular focus in this series.”

Sam has worked up drawings and photographs into paintings that focus on these remarkable features and prompt reflection on the nature and culture of our long relationship with the land. Sam commented:

“I really like the rural location and being able to walk or cycle straight out into a very interesting moorland landscape on my doorstep. The daily cumulative effect of this is important for me and my paintings and sketches have benefitted from the ease with which I can find inspiration and a sense of immersion in my work. The remnants of mining, archaeological sites and various other old structures that can be readily found or stumbled upon in the landscape have also provided me with much material to work with.

As I have followed various threads and interests, I have found local people (especially farmers) to be a good source of first-hand information on the history and remains within the area. There is also a quite distinct feel to the landscape in Northumberland which has been a welcome contrast from my last years of living in the South East – the low intensity land use of sheep farming, sparse population, dark skies and expansive views provide a quite distinct range of reference material to draw on as a landscape painter.”

Sam will soon complete the first residency in the multi-partner programme ENTWINED: Rural. Land. Lives. Art. Initiated by Visual Arts in Rural Communities, this programme explores, through artists’ practices, different aspects of what makes a ‘place’ and reveals the interconnectedness of rural land and lives. See www.varc.org.uk/entwined for more about the programme.

For more about Sam and to download his end of residency booklet as a pdf with a full essay by Alexander Marr visit varc.org.uk/entwined/sam-douglas/

Once we can get out on site again, we will be working with our partners in Forestry England to improve footpaths to the Three Kings. Watch this space! 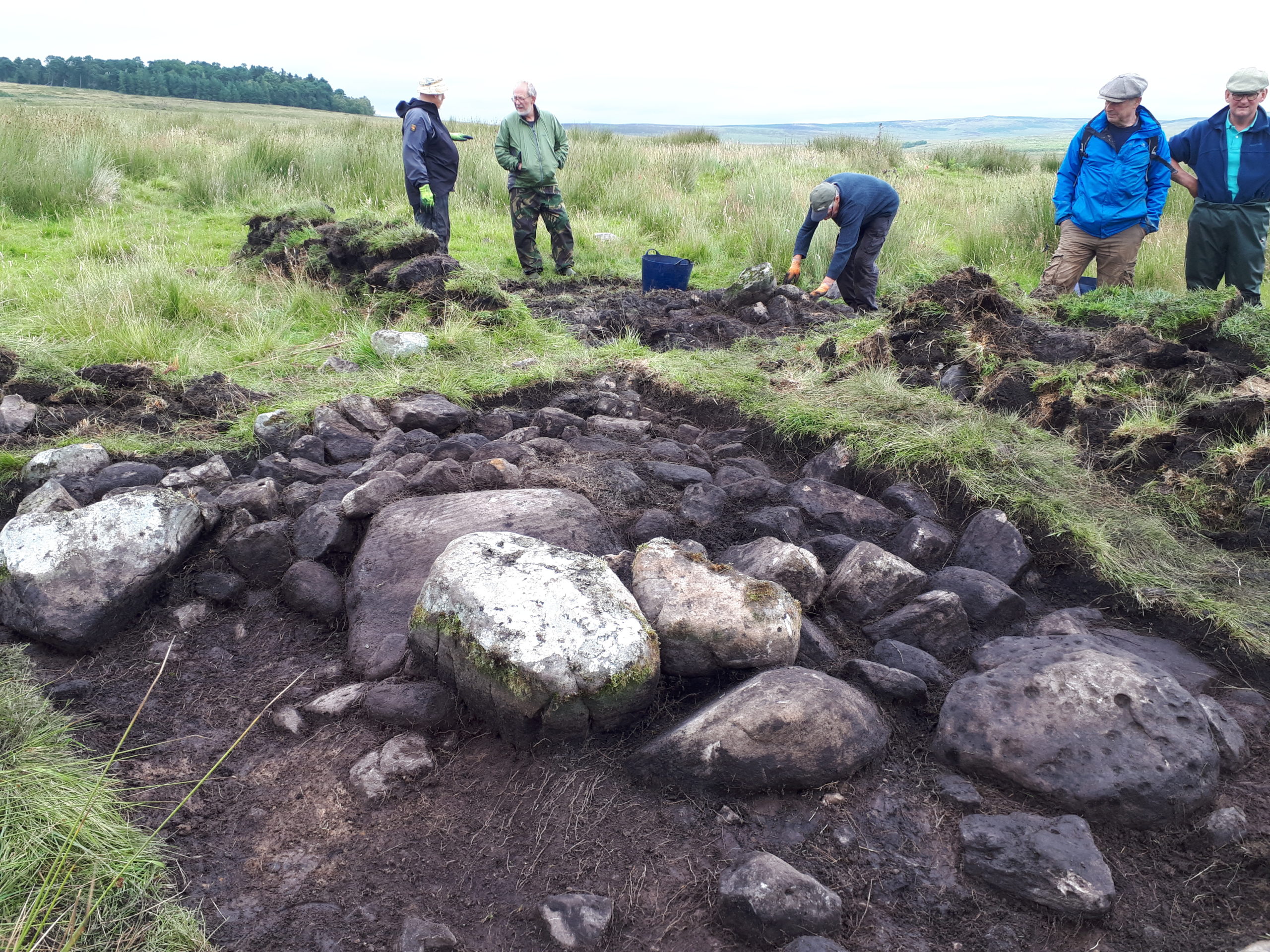 Our excavation of possible prehistoric features at Bellshiel was carried out in August 2019, in partnership with the MoD and Operation Nightingale. An archaeological evaluation report for the dig has been produced by Wessex Archaeology. You can download the full report here:

Plans are currently being developed to carry out future investigations of other potential prehistoric features in this area. Further information will be available here and on our social media pages.

Our excavation of an Iron Age/Romano-British enclosed settlement at Rattenraw was carried out in July and August 2019. An initial archaeological evaluation report for the excavation has now been produced by The Archaeological Practice. You can download the full report here:

There will be further research into the finds made and the results of this research will be published in due course. It is hoped that further investigations will be carried out at Rattenraw – further information and details will be available here and on our social media pages.