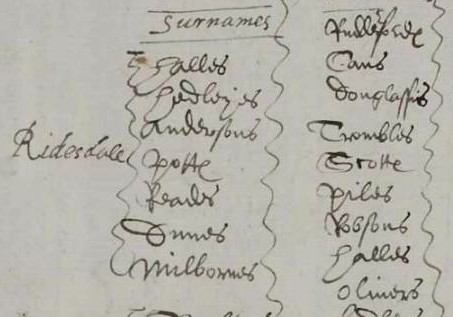 Take a deep dive into one of Redesdale’s most famous and bloody Border Ballads with Northumbria University’s Head of History, Dr. Neil Murphy. This piece was written by Dr. Murphy as part of his Community Heritage Funded project, Border Bloodshed.

Percival Reed, lord of Troughend, was keeper of Redesdale in the latter half of the sixteenth century. His house at Troughend (near Otterburn) was in the heights of Redesdale and gave him a good view over the region and allowed him to guard for invasions from Scotland, though as we shall see this also put his house at considerable risk too. As part of his duties, Reed was responsible for apprehending Scottish reivers who went raiding in Redesdale. One of the most notorious of these families – and who caused much bloodshed, theft and havoc in Redesdale – were the Crosiers, who came from Liddesdale (which lay just over the frontier in Scotland). Reed arrested one of the younger men of the Crosiers, which then led to a wider feud between him and the family – and one which would have deadly consequences for Reed.

The Antagonists: The Crosiers of Liddesdale and Halls of Girsonfield

The head of the Crosiers (‘Auld Crosier’) to get revenge on Percy Reed worked with the Halls of Girsonfield in Redesdale, who despite being English were their allies. The Halls invited an unsuspecting Reed to go hunting with them around Bateinghope Burn and Rooken Edge Hill. Towards the end of a tiring hunt, Reed slept a while and when he woke he found five members of the Crosiers there seeking revenge for him. Reaching for his gun, Reed found that the Halls had filled it with water. They had also jammed his sword into its scabbard and taken its harness, which left him both defenceless and unable to flee. His pleas to the Halls were unheard and they left him to the vengeance of the Crosiers, who killed him in thirty-three blows in a vicious attack. They then cut his hands and feet off his body and left his mutilated corpse in the burn, from where the parts of it were later retrieved and brought back to his family at Troughend in pillow cases. The Halls also paid for their treachery by being driven from their farm at Girsonfield and were never to return to Redesdale. Local legends speak of Reed’s ghost haunting Todlaw Mill on the River Rede and the place where he was butchered at Bateinghope Burn.

Tracing the Ballad through Historical Accounts

The main source for this is the border ballad The Death of Parcy Reed (see below for full text), which was passed down by word of mouth for generations in the region before being recorded by folklorists in the nineteenth century. While there are no historical records recording the actual murder, we can find mentions of Percy Reed in contemporary manuscript documents and the presence of the Reed and Hall families in Redesdale are recorded for this period (Document 1).

For instance, in 1584 one “Percevall Reade, the young larde of Trochen”, complained about Scottish raiders (over 200 of them), including one “Clemey Crosier”, attacking his lands and stealing 200 cattle, 80 horses and taking 80 prisoners (Document 2).

There was a further two attack on “Percevell Read of Trowhen” in 1589 by Scottish raiders – including more members of the Crosier family – which led to the loss of cattle and linen and the death or capture of several of his men (Documents 3 and 4).

The Death of Parcy Reed