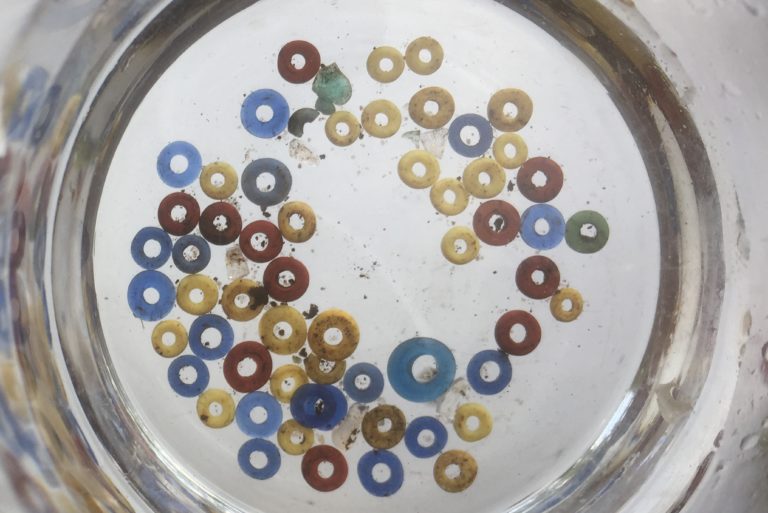 An archaeological dig has resulted in significant finds being discovered on a Redesdale farm, including 2,000-year-old jewellery. The excavation, which took place at Rattenraw Farm from 22nd July – 2nd August, was organized as part of Revitalising Redesdale’s ‘Lost Redesdale’ community archaeology project.  Fifty-three volunteers took part in the dig, with people of all ages, from six to eighty picking up a trowel and digging in.

Finds included fragments of Iron Age pottery, a whet stone for tool sharpening, part of a quern stone for grinding grain, ironworking slag and over 50 coloured glass beads from a necklace or bracelet. The type of artefacts found are typically associated with the late Iron Age and Romano-British period and are approximately 2,000 years old.

The excavation also revealed areas of extensive stone paving, consisting of large flag stones, positioned on top of an earlier cobbled stone floor, suggesting the settlement was lived in by successive generations and was altered and updated over time.

The excavation follows on from archaeological surveys that have been carried out on the farm over the last 18 months, thanks to support from the owners and led by members of the Tynedale North of the Wall Archaeology Group (NOWTAG).This work provided the first accurate record of the Iron Age/Romano British settlement as well as making a number of new discoveries elsewhere on the farm.

The excavation was directed by Richard Carlton of the Archaeological Practice, who said, “The investigation has confirmed the results previously carried out on similar enclosures in Redesdale, such as by Beryl Charlton & John Day in the 1970s, but has also found significant differences, including a richer array of finds. The significance of these, in terms of dating the site and understanding its function, will be more apparent following full analysis of artefacts and other materials found there, but it certainly has the potential to make a very significant contribution to the understanding of the later iron age in this part of the Borders. The excavation was made particularly enjoyable and worthwhile by the participation of many local people as well as the encouragement and full support of the landowners.”

Revitalising Redesdale Heritage and Engagement Officer, Karen Collins, said, “It has been a very exciting dig. We uncovered features we had not expected to see such as the stone flagged flooring and finding the beads was a real highlight. It has gone beyond all our expectations and everyone involved is understandably very pleased with the results! I’d like to say a big thank you to everyone who gave their time and energy in making this such a success.”

Chris Jones, Historic Environment Officer for Northumberland National Park, said, “The work of all those involved in the survey and excavation on Rattenraw Farm has added considerably to our knowledge of past human activity in the area. This excavation has provided us with an insight into what life might have been like for the people who lived here over 2,000 years ago. It shows what can be achieved through the hard work of local people and other volunteers from further afield and how this might inspire a love of the rich and fascinating archaeology we have in the National Park in particular.”

To get involved or more information, please contact Karen Collins, Revitalising Redesdale Heritage and Engagement Officer, on 07741 194309 or email karen.collins@nnpa.org.uk.