My Revitalising Redesdale: Scything – An experience! 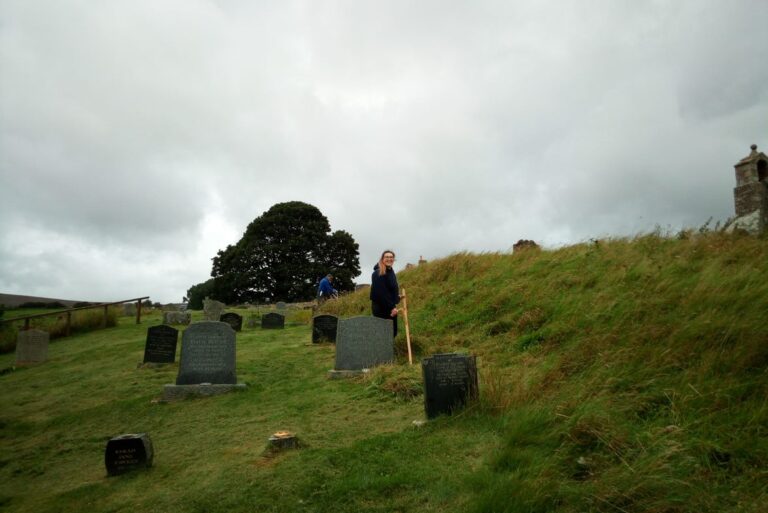 At the beginning of the month, I was fortunate enough to visit the beautiful St. Cuthbert’s Church, Corsenside. I was there with Northumberland Wildlife Trust volunteers to provide reinforcements to a group of local volunteers, continuing their great work in the churchyard over the last couple of years.

We were tasked with scything two sections of grassland within the churchyard. The majority of wildflowers had finished flowering but the scythed wildflower meadow areas and the adjacent unmanaged coarse, tussocky grassland were still poles apart!

The first task of the day was to become familiar with the scythe itself. Having not used one before it was quite daunting knowing I’d be wielding a large blade around at my feet. I hoped that I’d managed to tighten it correctly so it didn’t swing off and do some harm! (Editor: I don’t think this actually happens, but if not tightened enough the blade can easily get knocked out of correct alignment and need adjusting again!) Following steps set out by a scythe training manual, helped by the best efforts of someone who had done it before, we managed to attach the relevant parts of our scythes and correct the position of the blade for accuracy of cut. It was then time to practice with our newly assembled tools.

Others took to it straight away, however I seemed to lack the technique of a graceful swing and felt as though I was instead hacking my way through the grass, using brute force rather than skill. I chose to believe the others when they insisted that skill comes later, with more practice. Either that or it’s their cunning plan to get me to help again next year…

I’m told we had it much easier than in previous years, since this is the third year of the project, so the meadow areas have had their annual cut twice before. Despite this, the next day I felt aches in muscles that I didn’t know I had and clearly hadn’t used before! However, being able to see easily the areas cut and the difference this management is making to the diversity of the grassland made it well worth the effort.

By far my favourite part of the whole process came later: The cut grass is left to dry, turned, the odd nettle/thistle/rosebay willowherb is removed to compost, left to dry again, turned and so on until it is time to bale the hay.  A simple process, but therapeutic and rather fun, playing with the purpose built hand baler, alongside a smaller working prototype making tiny bales. Together we created a tower of hay bales ready for local distribution.