My Revitalising Redesdale: Cycling into Redesdale on Route 68 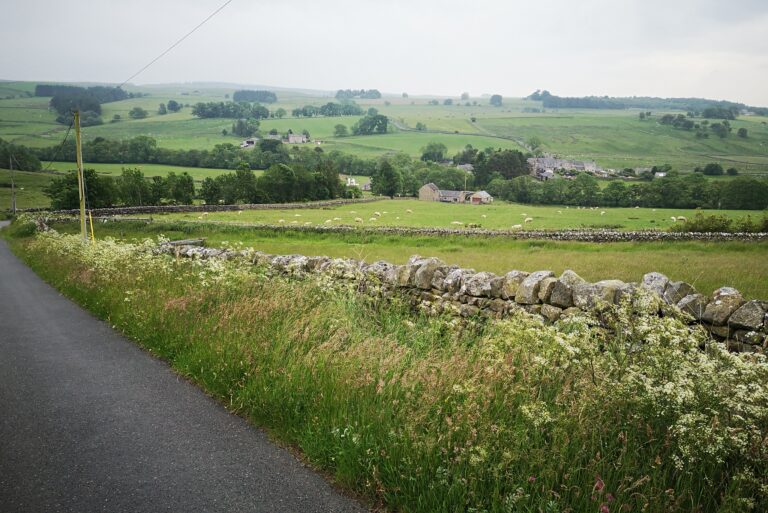 Now that small steps are being taken to relax restrictions on movement and from the 4th July many more businesses will re-open, many of us are starting to think about holidays and longer trips in the outdoors. So, this week’s My Revitalising Redesdale is a bit of expedition inspiration brought to you by Mike Duckett.

Mike works for Go Volunteer!, which is part of Newcastle University Students’ Union, and leads on our fantastic Redesdale Revitalises project but has been furloughed since the end of March. Mike’s cycle tour is a great example of how we can re-start exploring in a conscientious and green way. Over to you, Mike:

As lockdown eased at the end of June, we decided to cycle from our house in Tynedale to Redesdale. The 68 cycle route goes from Bardon Mill (where we live, on the South Tyne) all the way through Wark Forest and the North Tyne near Stonehaugh to Bellingham, before going over the edge of Corsenside Common and down into Redesdale. In total, from Bardon Mill to Elsdon, it worked out as about 54 kilometres. There were regular hills and some very contrasting roads – from forestry tracks to lovely smooth back-roads. We were on hybrid tyres and they were fine throughout.

Now I should mention that I am not an experienced cyclist. I bought my first ever bike at the start of the covid period when, as a non-car owner, I realised I was really going to struggle to get around – even so far as a post office. My partner Caroline, who shared the journey described below, is a much more competent and practised cyclist. Personally I never even managed my cycling proficiency test at school, because I’d fallen from a roof and was off school at the time with broken things. And then this time, one week into getting my new bike, I went bouncing into a hedge, completely buckling the front wheel and giving myself a 4 coloured bruise that took a full month to ease off.

So the 68 route was a sensible choice, because it was mostly off shared roads. While Caroline expects other vehicles to abide by the highway code I generally take a more cautious approach and would often pull the bike off the road for a breather when I saw cars coming. My newbie nerviness however did not affect our speed and our enjoyment of the cycle ride and we can definitely recommend doing it. Get off the train at Bardon Mill and just follow the 68 signs north!

I will skip the early part through Tynedale (although I am writing up this and more trips into Redesdale at www.redesdaling.blogspot.com), and begin at the most relevant part for Redesdale: starting off at a proper functioning town with bakery, pharmacy, George’s great new veg shop and all those extra essentials that you need.

As ‘outsiders’ at this time we weren’t sure where we were welcome to sit (some pub benches had ‘do not sit here’ signs) but we had to stock up on energy before leaving Bellingham. The first climb out of Bellingham is shared not only with the Pennine Way but also with motor traffic on a fairly steep and curvy road that is busy by virtue of being an important link route. When you lose the houses and pavements either side and pass the caravan park, this becomes a section of the cycle route to just plug on with and not relax or drift about. The good news is there is no navigation to do.

Spoil heaps from the old mining days mark the peak of the hill and give a pleasing platform for grazing sheep.

After this short slog up the hill (80 metres gain) you’re on fairly narrow roads with a massively abundant hedge on one side (especially full of pink wild roses) while the first soft views of the watershed to Redesdale appear on your right hand side.

I took advantage of the laybys to take stock of where we were passing. Like everywhere in Tynedale and Redesdale, there is great detail and history in the rural buildings of the area: I’d never before noticed this bastle as part of Hole farm (looking back to where the Rede joins the Upper Tyne).

The road is pretty smooth, suitable for touring bikes as well as our own hybrids. An easy decline takes you down to your first proper stop in Redesdale.

Low Cleughs Bastle, a picturesque ruin with information board, would be a nice short walk (amongst many here), but we didn’t do any extra side trips on this occasion : one thing about cycling is it really puts your legs off walking!

Carrying on to West Woodburn stays easy and slightly downhill, plus it has a better views around you so you feel less of a sense of traffic risk as you gaze around. The exposed rock at Calfclose Crag looks especially good from here.

And then the approach to West Woodburn is surprising, at least for people like me who are used to the A68 route, who have never seen the scenic village row from this direction before.

Ah, if only the Bay Horse had been open and there were no troubles in the world.

We stopped for a breather, and I’d encourage anyone to get off their bikes here and push right, for the 150 metre section that you’re on the A68. Nice wide pavement and you get to see the Rede as it passes under West Woodburn Bridge.

And then this is the sign left for the road to East Woodburn.

A new bit of Redesdale for me, and it was a really lush quiet road. We passed a walker and a man teaching his daughter to ride a bike. It strikes me as a great, fairly flat, nicely picturesque stretch for anyone who wants to have a little pootle about (very little – the road connecting the Woodburns is only one and a half kilometres long and by car you’d zip between without barely noticing): in June it’s packed full of flowers and a peaceful riverside feeling.

Into the lovely collection of old buildings that is East Woodburn, where the 68 route turns left and crosses the next bridge and then heads uphill.

This uphill, coming at the end of a long day’s cycling for us, meant there was nothing for it but to push the bikes up.

The view back down behind us made us think it would be amazing fun coming the other way here on the 68 route: just imagine freewheeling down this way into East Woodburn and then along to the Bay Horse.

You skirt the bottom of Darney quarry and then for a good long while you’re in peaceful, very rural country on single lane roads.

The sort of country that would be recommended as therapy for those stressed out.

Streams, hidden views, cattle grids. At one point there is even a white gate to open and close to carry on, so you have full permission to go as slow as you like.

One thing to mention is that the signs for the 68 cycle route fizzled out some time after East Woodburn. Not that there are a whole lot of choices to go wrong with, but as you go for 5 km on this lovely pastoral valleyside you get so you’re not quite sure where your delightful, slightly up-and-down route is taking you, the odd bit of reassurance might come in handy!

And then it’s the A696 at Monkridge. It’s been a lovely stretch coming down here and I am frankly terrified of this major road. We hadn’t researched in advance so were anticipating having to share with traffic as we headed right and south east a little till the Elsdon turn off at Raylees. Happily, there are people out there much forward-thinking than me and after a layby which is there as you meet the A696 (meaning you do not need to venture on to the A696 at all), there is a continuous cycle path parallel to the main road.

Unclear signage for bikes I thought, and Caroline was about to carry on before I called to her to stop here.

You cross at the roadsign for Elsdon and beware.

It is natural, if you’re not thinking, to cross over into the wrong lane, where the traffic coming out of Elsdon has a blind passage just before it joins the A696. So a bumbling cyclist could easily find themselves encountering a blindsided vehicle. Incidentally, the cycle signs here are written for the Sandstone way, temporarily equivalent to the 68.

Then after this pinchpoint, it’s back to that Redesdale country tranquility again. A little bit of uphill, tree covered lane, which is fairly narrow if there IS traffic, though we met none.

Then a properly delightful freewheel into the lush green of Elsdon where we stopped again on the Rede.

We cooked up some coffee on a camping stove under the great oak, but you will no doubt make use of refreshments from the cosy Bird in Bush or Bike Café.

One response to “My Revitalising Redesdale: Cycling into Redesdale on Route 68”